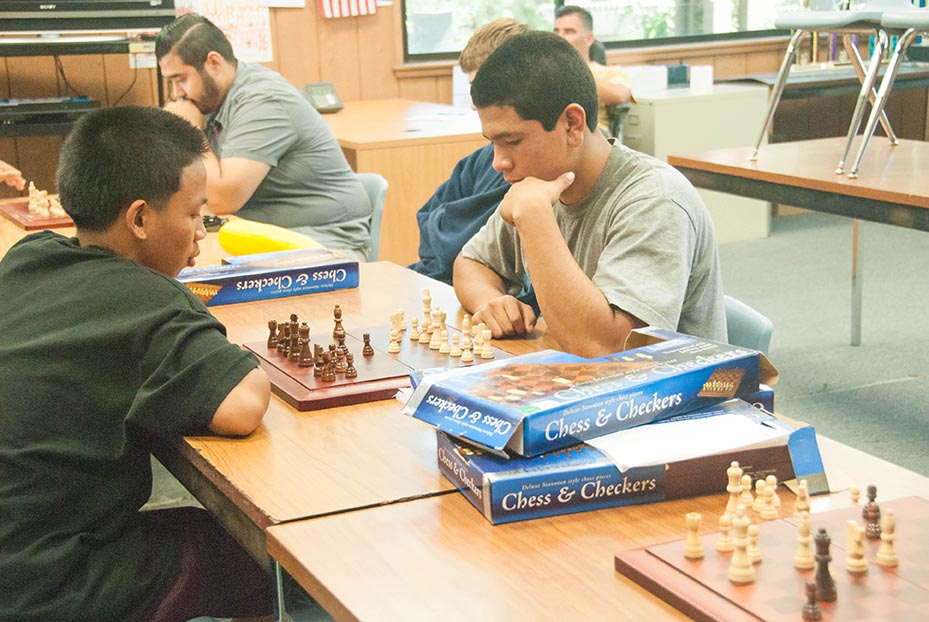 Benjamin Franklin said, “The Game of Chess is not merely an idle amusement; several valuable qualities of the mind…are to be acquired and strengthened by it, so as to become habits ready on all occasions.”

Tell that to the Boys Republic students playing the game over summer break. Several eager students competed in a chess tournament on August 25, 2015. As each boy strategized his next move, he may not have known the “qualities of mind” he was cultivating.

Qualities, Franklin identified, as foresight, which William practices as he lifts his hand off his pawn, sensing his opponent’s strategy to isolate it. And circumspection, apparent when Joey scans each piece on the board. Caution also motivates Corey’s long pauses before each of his turns.

The teens practice the same qualities during chess that they develop daily on campus. Anticipating an opponent’s strategy certainly helps students win games, but it also guides them as they decide appropriate behavior for group activities, whether it’s for a cafeteria lunch or an off-campus hike. Careful observation, too, is encouraged in daily group counseling sessions. In groups, students are responsible for closely watching their peers so they can provide them with feedback on their behavior. Giving feedback, in turn, helps each teenager begin to practice caution as he starts taking his own advice.

Often the same students excited to play chess may not show the same enthusiasm before a group meeting or one-on-one discussion. But that doesn’t mean the students aren’t thriving as they learn new habits. Just as they help their opponents read the game rules and shake hands after they’ve lost five games in a row, the young players flourish as they put new habits into practice.