"NOTHING WITHOUT LABOR" - SINCE 1907
Steve McQueen Car Show

For more than one hundred years, the Boys Republic in Chino Hills has served as a consistent reminder to the community that youth, no matter how challenged, can overcome great obstacles and achieve unimagined success. No former student proved this to be true better than Steve McQueen, a 1946 alumnus of Boys Republic whose story started as a troubled youth and ended as a 20th-century icon. During the height of Steve’s demanding movie career, he would visit Boys Republic often and leverage contacts, friends, and movie studios to help the needs of the school.

The Friends of Steve McQueen Car and Motorcycle Show exists to extend that legacy through the leadership of co-chairs Chad McQueen and Ron Harris, the creative genius of Peter Dunkel and a talented committee of dedicated and tireless volunteers.  Since 2008, the annual event has raised more than $4.3 million in proceeds that have been applied to fund meaningful programs and campus projects at Boys Republic.

Held on the first weekend in June and themed for a different Steve McQueen movie each year, The Friends of Steve McQueen Car and Motorcycle Show has grown to include a Commemorative Dinner, and most recently, a Welcome Party. Each year thousands of guests attend the weekend events, all held on the sprawling grounds of Steve McQueen’s former school.

To purchase event tickets and vehicle registration, click here and scroll to the bottom of the page, or call Boys Republic (909) 628-1217.

The car show committee also hosts The Steve McQueen Car Show Rally each spring to kick off the Car Show. This weekend destination drive can accommodate a limited number of participants.  Click here to register for the Car Show Rally, or call (909) 628-1217. 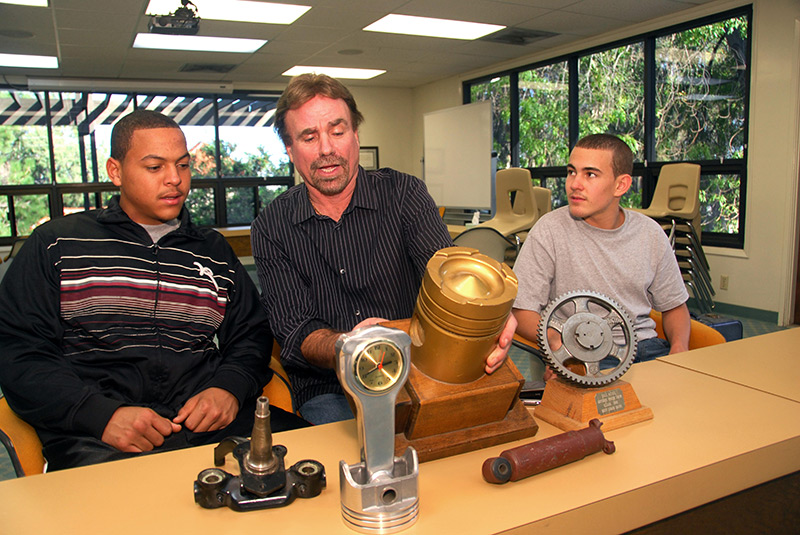 The events of the car show are also fully reflective of Boys Republic’s values and traditions. Everything that occurs at Boys Republic will have student involvement in some form or another. The car show is no different. From preparing the grounds, to coordinating the spectator parking lot, to serving the Friday night dinner and working in countless other ways, the boys’ influence can be sensed throughout.

Above, committee member, Peter Dunkel, discusses his original idea to have the students make all of the trophies by combining donated car parts with creative fabrication in the campus woodshop. Below, student judges present their proudly crafted trophy to one of the day’s winners. More than just a car show, The Friends of Steve McQueen have created an opportunity to introduce countless automotive and McQueen enthusiasts to Boys Republic and the efforts of the students to turn their lives toward a positive future. 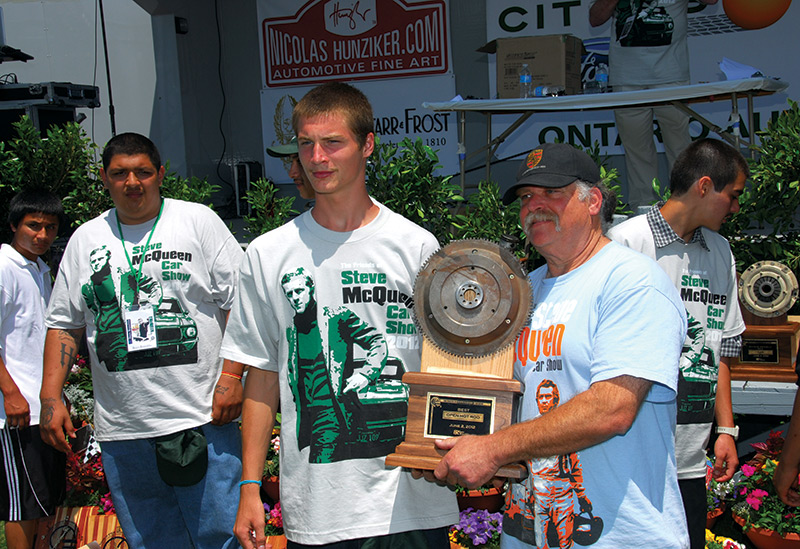