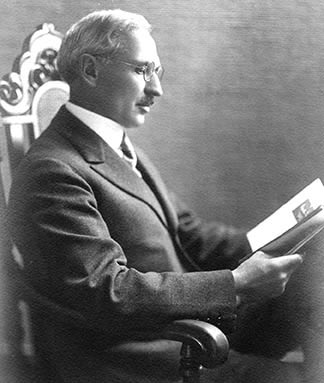 Noted architect Myron Hunt began a long association with Boys Republic in 1911, at the request of Boys Republic’s Board of Directors. Hunt is perhaps best known for designing such Southern California landmarks as Pasadena’s Rose Bowl, the Huntington Library, the Pasadena Public Library, and buildings at Occidental College and Pomona College. He was a leader in defining a regional idiom for Southern California architecture and clearly left a lasting impression upon Boys Republic’s main campus.

Hunt’s overall plan for the Republic village took inspiration from the colony of George Junior Republic, in Freeville, New York, the model for such programs at that time. The plan originally called for a schoolhouse, twelve to fifteen cottages, shops, an administration building, hotel and chapel. The center of village life was-and still is-a plaza 500 feet across. All of the roads connecting different parts of the campus were looped and curved, owing to the hillside contours upon which the settlement was situated. 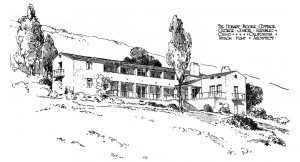 Boys Republic’s Board of Directors adopted Hunt’s general plan and set about creating a small colony and farm environment that would function as a self-sustaining community. Today, three of the “cottages” Myron Hunt designed (Fowler Cottage, McCormick Cottage, and Laws Cottage) still define the unique look and feel of the open Boys Republic campus. The cottages were designed to serve as a focal point of daily student life. Each accommodated twenty-four boys in twelve bedrooms, ten sleeping porches, and large living and dining rooms.

In 1915, Hunt designed for Mrs. Fowler her beautiful residence. Perched upon a slight knoll overlooking the Republic village, she called it “Casa Colina”. The design called for a living room with a raised stage, so that the boys might put on productions and so that musicians or other artists might bring cultural enrichment to the students’ educational experience. The home was featured in a 1917 issue of American Architect. After Mrs. Fowler’s death, the facility was used for the treatment of children afflicted with polio. That program, under the direction of Mother Smith, became known as Casa Colina Rehabilitation Hospitals. 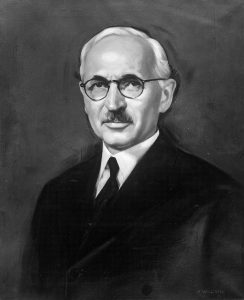 The Margaret Fowler Auditorium, located at the center of the Boys Republic campus, was also a Myron Hunt design. It continues to host weekly student Town Hall Meetings. Three attached classrooms have provided academic instruction for more than 20,000 students since the building was constructed in 1939.

Myron Hunt was married, in 1915, to Virginia Pease, an educator and founding member of Boys Republic’s Board of Directors. It is said that the Hunts spent their honeymoon working with students at Boys Republic. Both were active in Los Angeles area civic and philanthropic life. In 1927, Myron Hunt was given the Arthur Noble Award for outstanding service to the community.